National Pro Bono Week: “a small amount of our time can make a huge difference to people’s lives.”

I first got involved through a new partnership that was launched between Charles Russell Speechlys, Atkins and Z2K. I was particularly drawn to this pro bono project after finding out that Z2K had a 93% success rate and that 70% of all disability benefit appeals are successful. I found these statistics to be staggering and what is clear is that a small amount of our time can make a huge difference to people’s lives.

One of the most rewarding aspects of this project is the chance to get to know the client, understand their circumstances and then work with them to overturn a decision which has had such a detrimental impact on their lives. They are people who have been let down by the system and are very grateful that someone is willing to advocate on their behalf.

My first case was representing Joseph*, a young man not too dissimilar in age to myself, who was suffering from an undiagnosed physical health condition which meant his mobility was limited. He was awarded no points by the DWP during his initial application, nor following the mandatory reconsideration. Understandably, he was incredibly frustrated and was forced to do a job he was not fit to do.

My role involved going through the bundle from the DWP, looking at the previous application form, and then understanding Joseph’s physical needs. As with many of these cases, his circumstances do not fit neatly into a box. Could he walk more than 20 metres, but not more than 50 metres? If he was over the 50-metre mark, suddenly that changed the whole calculation. To what extent could we take into account the pain threshold or the recovery time once he got to the end of that 50 metres? Once we had come to a conclusion, we then drafted our submissions to the tribunal, seeking to show why the first decision was both arbitrary and unfair.

A few weeks later we were in front of the tribunal. The tribunal asked Joseph a series of questions which covered different aspects of his daily needs and medical records. Luckily for Joseph, he was part of the 93% that successfully appeal the benefit decision with the help of Z2K. This means he will get the correct entitlement going forward, but also a substantial back payment for all the wrongly held benefits over the past year. It is difficult to describe the elation and relief he felt, but what we know from the statistics is that this is not an isolated case.

Working with Z2K has been such a rewarding experience and a reminder of some of the reasons why I became a lawyer. It has also helped me develop my legal skills, particularly in drafting, advocacy and critical analysis. I know from my colleagues who have worked on this project that they have had similar experiences and that as a firm we are able to make a huge difference. I have already volunteered to take on a new case and look forward to working with Z2K and Atkins on further cases in the near future. 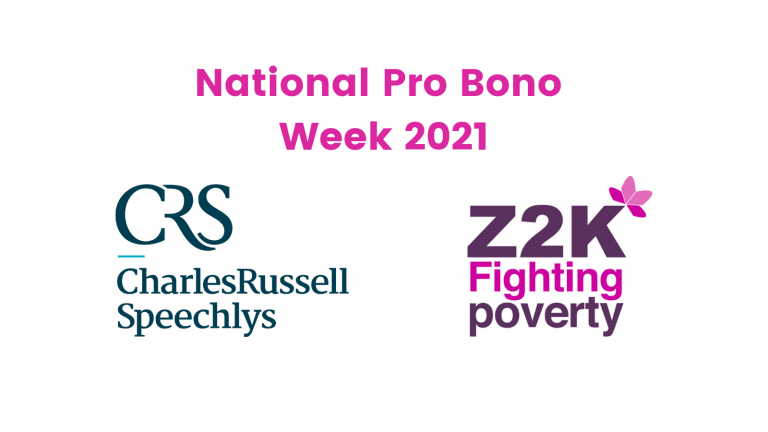