National Pro Bono Week: “navigating and understanding the various kinds of benefits can be difficult”

Z2K is an amazing charity that provides specialist welfare benefit support to individuals and working with them has been an incredible privilege for me. I cannot speak more highly of Z2K and the importance of the work they do supporting individuals who are often the most vulnerable in society. Many of us here at Kingsley Napley might say that one of the reasons that they decided to pursue a career in the law was to fight injustices in the system. Well, here is your chance!

If you are like I was and have no clue how the welfare system in the UK works, navigating and understanding the various kinds of benefits can be difficult (even for someone who is legally trained). Luckily Z2K are on hand to train you. You learn that assessments are carried out to determine if an individual is suitable for a benefit or if an individual already receives a benefit whether the benefit payments should continue. One of the available benefits is Personal Independence Payment (PIP) (that replaced the Disability Living Allowance for those over the age of 16) which, is essentially extra money for an individual who is affected by a long term physical or mental health condition or disability, and as a result has difficulty doing certain everyday tasks or getting around because of the condition. There are two components of PIP, the daily living and the mobility component.

I was asked by Z2K to take on a case in relation to a woman called Sophie* who suffered with numerous mental health conditions and had her PIP removed following an assessment as well as her housing benefit support.

After speaking to Sophie and understanding just how inaccurate the determination was and how much she struggled on a daily basis, it was my job to put forward her case at a tribunal as to why she was entitled to the benefits based on how her conditions met the criteria and to obtain acknowledgment of her mental health conditions. This was not an easy task for me to do and I could now see why Z2K offered the support they do. An appeal was lodged, and we asked for the hearing to be listed urgently because of Sophie’s vulnerable housing situation as a result of housing benefit support having been withdrawn. Despite this there was still a delay. The process was taking its toll on Sophie who felt as though the whole system was against her and was understandably concerned about her future.

The hearing itself was very challenging for Sophie as she was asked numerous personal questions by a tribunal panel and there was also a representative there from the DWP. It was very intimidating for me to speak so I can only imagine what Sophie must have been going through. I spoke with Sophie before and after the hearing and she said that she wanted me to know that the only reason she was able to do the hearing was because I was there providing her with support. Sophie said that without that support she would have felt totally alone.

Despite the long-winded process and the delay in getting the hearing listed, the results were fantastic, and Sophie’s appeal was allowed for both the daily living and mobility component. The award meant that not only going forward does Sophie now receive PIP for both components, but she was also awarded a retrospective payment, her housing benefits were re-established, and she now can benefit from the Motability Scheme meaning she can trade in her payments for an adapted car.

Sophie was so happy with the outcome of the appeal and could not have been more grateful. This made me realise just how much of an impact the withdrawal of benefits had on her and how my support had changed her life. And in a way that I did not expect, working on the appeal changed my life too by opening my eyes to some of the flaws in the benefits system and the impact they have on members of society and in learning that I could make a difference. The experience was very rewarding and I would highly recommend to others that they get involved with Z2K and help others navigate the system and obtain what they are so rightfully entitled to.

*name has been changed for confidentiality of the client 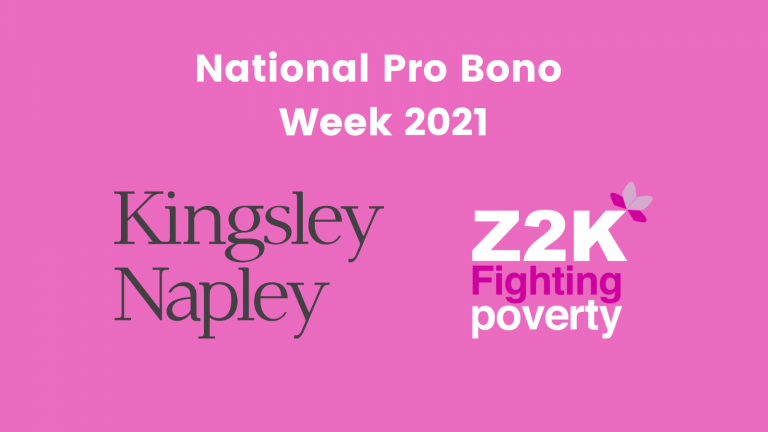