DWP’s decision-making is a scandal it must address

Z2K's Jamie Thunder recounts his experience at a PIP Tribunal where Z2K successfully challenged DWP's decision, and explains why this is far from a unique case.

A few weeks ago, I sat at the back of a small room in a nondescript building in central London. In front of me were six people: a man called Robert (not his real name), a caseworker from Z2K, a Presenting Officer from DWP, and the three Tribunal members who would decide what rate of PIP Robert should get.

Several months ago, Robert had made an application for Personal Independence Payment (PIP). The DWP had initially only given him the Standard rate for Daily Living, and confirmed its decision when he challenged it.

Over the course of nearly two hours, Robert was questioned in detail about his multiple health conditions and the effects they had on his life. By the end of this process, the DWP officer accepted that Robert should have some extra points for one of the components – but this wasn’t enough to give him any additional PIP.

Robert left the Tribunal not knowing what the panel would decide. But a few days later, we learnt that he had been awarded the enhanced level for both his mobility and his daily living. That meant more than £90 extra a week, backdated to the start of his claim – more than doubling what the DWP had decided, confirmed, and continued to argue to the Tribunal that he should get.

This was, eventually, a good result for Robert, who is just one of the many clients that Z2K supports with PIP claims every year through our casework and our tribunals project. But it shouldn’t have taken more than nine months for him to get what he was due. And Robert is far from alone: something is badly broken in the DWP’s decision-making.

In recent years, the Tribunal has overturned the DWP’s decision in over two-thirds of PIP cases it hears. The DWP also sometimes concedes cases between an appeal being lodged and the hearing (known as ‘lapsing’). Altogether, in the latest year for which we have data, 83% of lodged appeals end with the original decision being changed, either by DWP itself or the Tribunal.

Even more damning is the fact that in over 90% of decisions it overturned, the Tribunal did so primarily on the same information DWP already had, or on what the client told them during the hearing. DWP wasn’t ambushed with new information from medical professionals; its Decision Makers either had all the information it needed to get the decision right, or it could have got this information if the assessors had asked the right questions in the right way.

This should be deeply embarrassing and worrying to DWP, and to the companies it contracts to carry out the assessments. These figures have been persistently bad since PIP’s introduction, and they show no sign of improving. It’s an ongoing scandal of poor decision-making that the Department has failed to address. Disabled people consistently have to push to get what’s theirs, often experiencing stress, anxiety, and financial difficulty while they wait. Then there’s the unknowable number of disabled people wrongly denied what they’re due who don’t appeal, so they simply go without.

And when DWP finally accepts, or is forced to accept, that it got it wrong, there is no apology. There is no compensation. Just a transfer of money owed and a bit of relief for the applicant, at least until the award comes up for review (which can be just months after an appeal is finally heard).

As the previous Minister for Disabled People, the new Secretary of State for Work and Pensions Chloe Smith will be well aware of all of this. With the Health and Disability White Paper expected to be published soon, she has an opportunity to take decisive steps to improve the system so that it puts people before process, and delivers the right outcomes first time.

Robert’s case, and thousands of others, show that there is a long way to go. 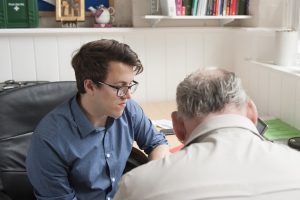